Differences Between Licensing and Franchising

Licensing and franchising are two forms of business agreements that typically involve the license of a trademark and the shared use of brand elements, technologies or systems in the operation of a business. License agreements are more limited than franchise agreements and involve the shared - licensed - use of a trademark, technology, or business system between businesses that operate independent of one another and use their own individual and distinct brands. Franchise agreements are broader than license agreements and, in addition to licensing the use of a trademark, regulate and control the entire branding and operations of franchised businesses that operate under a singular brand and using the same systems, supply chain, and operating procedures.

Summary of the differences between licensing and franchising:

Examples of license agreements, include:

In each licensing example, the underlying business operations of the licensor and licensee are distinct from one another and, unlike franchising, the degree of control that the licensor possesses over the licensee is limited to the underlying trademark or technology that is the subject of the license. Using the McDonalds and Disney Happy Meals example, although Disney will have say and control over how McDonalds uses Disney's trademarks on McDonalds Happy Meals, Disney does not have control over McDonald's overall business operations.

Examples of franchises include restaurants like McDonalds, retailers like GNC, healthcare providers like American Family Care, service providers like RE/MAX, and many other businesses and industries. To learn more about franchising read our Ultimate Guide to Franchising Your Business.

Why Licensing is Not an Alternative to Franchising?

License agreements are limited in scope to a business relationship between two businesses that share a common brand element or technology but, overall, operate independent of one another and without control over how the other operates and conducts its own business. Any control involved in a license relationship is limited to the use of the shared brand element or technology and represents only a small portion of the overall business operations. On the other hand, franchise agreements are much broader and, in addition to a businesses shared use of a brand, technology, and systems, regulates and controls the entire branding and operations of the underlying business.

Because points one through three are common to both licensing and franchising agreements, establishing whether a franchise relationship exists typically relies on the fees received at the time of sale and the level of control an agreement grants to a franchisor over the operations of a franchisee.

Under the federal Franchise Rule, if a business’ licensing agreement meets the criteria of a franchise, the legal relationship established by the agreement would be interpreted as a franchise – not a license.

If a franchise relationship is found to exist between the two parties in the agreement, the franchisor is then obligated to meet certain requirements under federal law. These requirements include issuing an FDD to prospective franchisees prior to offering or selling a franchise, properly preparing and disclosing the FDD and, in cases where a franchise operates within the Franchise Registration States, registering and filing additional paperwork in those states.

Because of the potential legal violations and penalties that could result from failing to meet those obligations, entrepreneurs should assess their legal agreements to ensure their business relationships are properly defined and legally compliant.

Advantages and Disadvantages of Licensing and Franchising

When it comes to the future of your business, “dressing up” a franchise as a licensing system can carry serious risks. In addition to legal costs and future negative FDD disclosures, violating franchise laws – even accidentally – can result in government actions, fines, civil lawsuits, rescissions and more.

The difference between licensing and franchising is extremely narrow and is determined by the degree of control created by the underlying agreement. Franchising is used to achieve the multi-unit expansion of a brand through franchised locations that maintain and operate under uniform systems and standards. Licensing is used to monetize trademarks and other intellectual property assets by allowing licensees to use the licensed assets within independently operated businesses. Licensing is not an alternative to franchising and if a license agreement includes the license of a trademark and control over the underlying business operations, it may qualify as a franchise agreement.

Learn more about franchising and how to franchise your business! 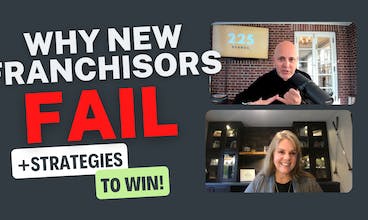