Do You Need to Hire Both a Franchise Lawyer and Franchise Consultant?

In addition to preparing your FDD, other legal steps involved in the franchising process that cannot be provided by a franchise consultant and that should be provided by a franchise lawyer, include: reviewing and registering your trademarks, establishing your franchising corporate entities, coordinating with your accountant the financial statements needed for your FDD, developing your Item 19 financial performance representations, and helping you learn franchising.

Is there Value in Hiring a Franchise Consultant?

Yes, there is. And, a good franchise consultant can prove to be invaluable. However, you need to be extremely careful about who you select and work with.

There are no special requirements or licenses needed before someone can call himself or herself a franchise consultant or franchise developer. So, within the franchising world, the degree of professionalism, experience, and competence among franchise consultants varies dramatically.

There are some franchise consultants that are only interested in selling you on the concept of franchising without providing you with an honest assessment about what it will really take for you to succeed as a franchisor. However, there are also some amazing consultants that can help you franchise the right way.

Be aware of franchise consultants and developers that promise you everything at a cost that seems too good to be true. Many times that the low cost options will result in missteps, misdirection, and lost opportunity in the long-term.

What if a Franchise Consultant Claims They Have In-House Lawyers that Can Prepare my FDD?

Within the franchise world, some unscrupulous franchise consultants and franchise developers claim to "package" everything to franchise your business. That is, they provide you with a fixed-fee proposal that covers everything from franchise sales and marketing to legal services that include FDD preparation and development.

Doing this is illegal and, many times, franchise consultants make misleading claims like they have an attorney "in-house" or that they have special agreements with an outside law firm.

In reality, many times what is happening is that you're receiving false information and the franchise consultant is illegally selling you legal services for an FDD that the consultant then outsources to a cheap attorney. Turns out, this becomes a volume business for the consultant and outsourced attorney and you miss out on a critical legal relationship.

When you franchise, you need to not only prepare for the immediate future of selling franchises but, also, to make sure that, the franchise system that you are building is legally protected longterm. You need a direct legal relationship with your attorney.

Ready to Get Started with Franchising? We're here to help get you on the right track and build an amazing franchise system. Let's discuss the next steps for your business. Contact our team at (800) 976-4904 or click below. 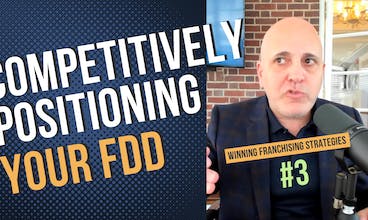